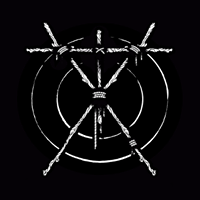 1.Thanks for taking the time to talk to The Grinder! You have a new single out, Tell us about it?
We chose the song Pull the curtain to be our first release for a few reasons, We felt it was a good representation of the band as a whole and a very solid song in our opinion
and also conveyed a strong message, so many people seem so distracted by media and pop culture that we fail as a society to see or care for the real issues facing civilization.

3.how would you describe your sound?
We don't really get into genres we just play what we think sounds good and gives us the most enjoyment to play but we are definitely a Modern heavy metal band with a mix of influences from old to new and crossing all genres of metal, really its up to the listener and what they hear.

4.Are you signed to a label?
Not yet, we are a very new band.

5.What has been going on with the band in the time before the release?
We formed the band in late 2018 Fabian, Linsey and Nathan had been jamming together for a while and Shannon responded to an add looking for a vocalist and bass player
and he also introduced Josh to the band and from that point forward we just wrote songs jammed and got ourselves ready to start playing live, we played a few local gigs and then went into the studio to record the single.

7.Who produced the new single and how did they effect the sound?
The single is self produced, we did obviously have input from Ron but the end result was very much the original vision.

8.Some like to record naked or in the dark with candles , Did you have any strange studio
practices?
We don't really have any strange studio practices (we haven't driven ourselves mad just yet), we just practice as much as possible so we know our parts and we do the usual warm ups, nothing out of the ordinary really.

9.Of course tell us where to hear your music and how to learn more about you?
You can find us on all major streaming and social media services.

10.What is your plans for the future of the band?
We are currently preparing to record our first E.P and just focusing on getting that done while playing a few local shows and then we will be looking to do some touring on the back of that release.