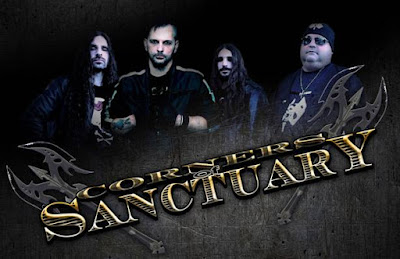 As the band prepares to embark on its first UK tour later this month, Corners of Sanctuary (COS) is releasing a new EP to mark the occasion. "For COS and Country," produced by Corners' guitarist Mick Michaels, is digitally set to release on March 13th through Exquisite Noise Records US and in association with the Vagabond Entertainment Group. Physical CD copies of the EP will also be available to fans while COS are in the UK.

“We are excited to release this new EP in conjunction with our upcoming shows in the UK,” said Michaels. “For us it’s all about the music…the more the merrier.”
"For COS and Country" features the band's new singer Stacey Lee on lead vocals and contains five tracks including the single "The Raid" which is now available for free as an MP3 download at the official Corners of Sanctuary website.
Download "The Raid" here: http://www.cornersofsanctuary.com/freedownloadsingle.html

“Working with Stacey on this project was effortless,” Michaels said. “It’s like we’ve been working with him all along,” he added.