Formed in late 2016, Ashen Crown are a Midlands based Metal band with a style that draws influence from many of Metal’s sub-genres. Most notable influences to the Ashen Crown sound are; Bolt Thrower, At the Gates, Benediction, Pantera, Sylosis, Gojira, Slayer, Obituary and early 90’s Sepultura.

With a Strong set of material, the band took to stage for their successful live debut early March 2017. Two weeks later the band began their Wolverhampton, Metal to the Masses campaign, progressing to and winning the Grand - Final in late May 2017. Ashen Crown then delivered a hugely successful major-festival-debut, laying waste to a packed-out New Blood Stage at Bloodstock Festival 2017, thereby cementing them in the ranks of the Bloodstock Alumni. Gaining a reputation for an aggressive, energetic live show and earning respect from peers and promoters, the band have since gone on to guest at regional M2tM events, support the likes of King Parrot, Memoriam and Obituary... not to mention a string of very successful headline shows. This has no doubt helped secure slots on prestigious UK festivals such as Hammerfest, Uprising, HRH Metal Meltdown, Manor-Fest and Amplified. Delivering hard hitting tracks, filled with raw energy, the band certainly pride themselves on getting the pit well and truly moving wherever they play!

After working with Fat Angel Management at Bloodstock 2017, Ashen Crown teamed up with them once again in October 2018 for bookings an PR. This has proven to be a successful move which has helped push them on to greater things within the metal community. However, this wasn’t the only change for the band around this time, as founding member / Drummer Chris McGrath, stepped down from the AC drum throne, plunging the band into a cloud of uncertainty. After advertising for a replacement, one candidate stood out head and shoulders above the rest... Mike Ellis (former As The Sky Burned / Whispering Vault) was a perfect fit and after an impressive audition secured the AC drum throne.

Ashen Crown’s initial releases have been well received earning Radio / Podcast play across the UK, Europe and USA, with the debut single / video "Fall of Thine Eyes" being released to great reception in March 2018. However, a full release was long overdue. With a full album pretty much ready to go, Ashen Crown have been extremely busy throughout 2019 recording and finalising their debut album - "Obsolescence" (due for release 1/11/2019). Recorded with Neil Hudson of Krysthla at Initiate Audio and Media, the new album signifies the start of a new chapter for Ashen Crown...


1.Tell us your name and the band you play for 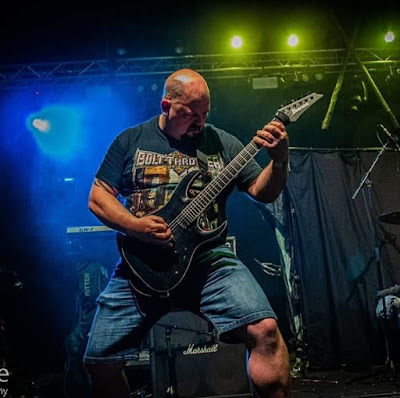 Dimebag Darrell was the player that really made me want to start playing. I remember seeing the Walk video on MTV at about 12 years old and being blown away by his riffs and leads.

3.Are you self taught or did you take lessons?
.
A bit of both really. I taught myself as a kid and developed a half decent ear. I did however take some lessons later on with a good friend of mine Steve Smith at Progress Music Academy, just to get a bit more understanding in keys, scales and basic theory. 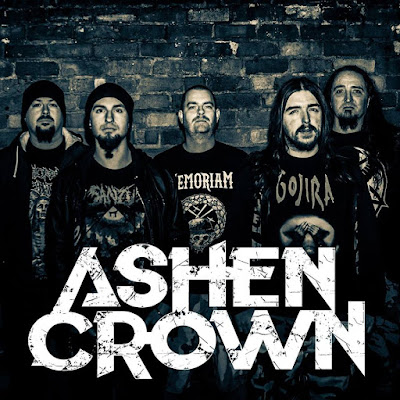 Yeah sure, or I`d like to think so at least. I dig heavy saturation but still like to maintain the clarity of the notes and let things breathe a little. I always notice very similar sub tones and nuances when playing through different rigs too, so guess a fair bit comes from a players hands.

My main 2 guitars for Ashen Crown are the Ibanez RGA Iron Labels. One grey / black fade and the other is the surreal blue burst. Absolutely gorgeous guitars! 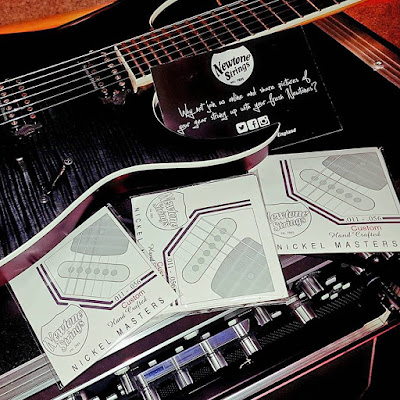 I use Seymour Duncan passives at the minute. TB-6 Distortion in both my RGA`s in the bridge and one has a SD Jazz and the other has a SD 59 in the neck… may look to try out some Bare Knuckles though as I`ve heard some great things on them for Metal tones especially.

I`m currently using a Marshall, JVM 205H through a 1960a Cab (JCM900 Lead) with G12-75T speakers. The JVM is a monster but so incredibly versatile, it does beautiful warm cleans, dirty bluesy crunches, heavy as hell overdrives and searing leads. Does everything I need from it and more. Speaker wise I prefer the tighter bottom end on the G12-75T`s to the V30`s. I am looking at trying out the X pattern soon though in the never ending search for the perfect tone… Which of course is totally subjective. LOL.
.
9.Do you have a pedal board? Tell us about that badboy

Yeah I`m just in the middle of re-doing it to be honest. It`s quite basic really, but I do like a few trick toys to play with. Aside from the tuner and gate, I have a Maxon 808 OD to boost the front of the JVM on my rhythm tone or dirty up the odd clean, a vintage BOSS HM-2 for when I want to play some dirty Swedish DM chainsaw stuff, a vintage BOSS CE-2 Chorus, an Electro-Harmonix Neo Mistress flanger… then in the loop I have a TC Electronic Hall of Fame Reverb and a Flashback Delay.

My dream rig, that’s tough! I like so many tones from different amps for different applications… So probably an old Peavey 5150 and Mesa Triple Rectifier for my Overdrives, a Marshall JCM 800 for my crunches (or add a HM-2) and maybe a Vox AC or a Fender Bassman for my cleans. 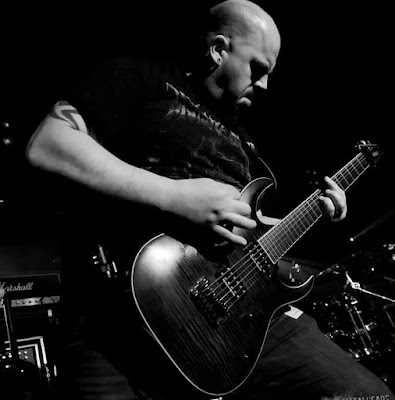 Not sure there`s any one player I can`t stand?.. anyone who`s ego outweighs their talent I guess??

Both kinda go hand in hand for me, I`m quite an average player in the grand scheme of things, so having half decent technique and tone gets me by. Without decent level of quality in either I guess it`d sound pretty bad. Ultimately, I think technique would be most important.


14.Who is the most overrated guitarist

Rather keep the one to myself to be honest… LOL 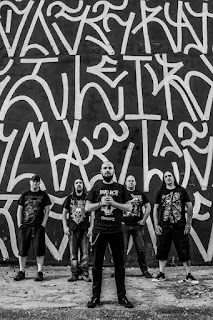 It would have to be Dime`, the guy had it all in my eyes… and as long as we could sink a few Blacktooth`s after too!
Posted by Wes J at 3:49 AM