Hailing from the mountains of North Carolina, Temptation's Wings was formed back in 2005. After several lineup changes the core was finally established at the end 2006 and the and has been making music since ever since. The mission statement has always been the same: Write songs they like and pushing the songwriting and technique beyond the previous release . A few albums and EPs have been released over the years, but the band really hit their stride with the 2012 EP Legends of the Tusk. The band played as many shows as they could supporting the EP and relentlessly promoted it. The work paid off when the trio was asked to open for the legendary Iced Earth by a representative of that band in their hometown's biggest venue, The Orange Peel. Now with the impending LP release of Skulthor Ebonblade and addition of new bassist Chad Barnwell, Temptation's Wings is eager to play to more ears than ever! 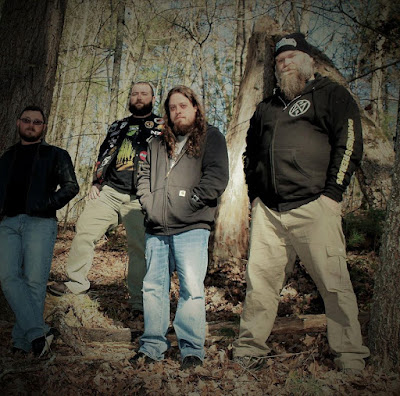 Gawtdam!!!!! Was literally what came out of my mouth,(totally expecting a Down rip off) when the song Dimensions came on and slapped me in the face. It wasnt until about 1:30 when I made up my mind these guy were instrumental totally cool right . From what I gathered they were Killswitch on moonshine ( basically a bluesy version). But wait there's more!!!!!!
As I hit play on the song Mirkwood I get a left hook of some Sixty Watt Shaman esk vocals pretty freaking awesome I think. Love the Killswitch type riffs with the Down/Sixty Watt vocals work extremely well for this 4 piece. Song lengths were spot on. The mix is perfect good art work and the guitar solos are fire and soulful. Great job dudes I personally dig the shit outta them .
https://www.facebook.com/twbandwnc/

Review by Chris of Haggardz Hellraizerz
Posted by Wes J at 5:41 PM