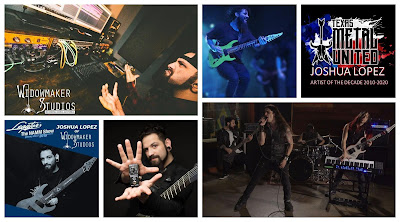 "Try it again...but this time play the in-betweens  and hit them really hard for me on this one."  Then he spins around in his chair with his leg up over the other one. He makes a few adjustments on the computer screen, turns a few knobs then proceeds to turn your music into a Widowmaker Studios production. You know full well that you'll hit those notes hard as hell because he told you so and you know it's gonna make your music what it needs to be.

Anything Joshua Lopez-Musician touches, well...just has it. Your music is coming together inside a studio that the Rio Grande Valley in Deep South Texas hails as the best around. Artists have been in and out and back again to Widowmaker Studios of McAllen, Texas. From a laundry list of locals spanning every genre to some of the heaviest metal bands in Texas and national acts, Joshua Lopez welcomes the work load with a smile and a small request....a good cup of Joe. They come back time after time because the knowledge and passion remains unparalleled and his positive personality is infectious to say the least. All in all, the man just knows how to produce.

A man of many hats, you can tell by looking at him the gears are always turning and the energy NEVER stops. If he's not in front of a computer screen producing or behind the scenes organizing a show, he's running sound or ON stage displaying unparalleled virtuosity in one of his many popular bands ranging from the heaviest slams to the most technical of sounds with instrumental acts Levatio & Sonic Boom and most recently with power shred masters Immortal Guardian. You'll also find him in the Legator Guitars booth at NAMM  doing product demonstrations; ripping insane solos over his original compositions & informing thousands of people from all over the world on his Youtube channel doing tutorial videos & gear reviews.

We recently took to social media for shits and gigs and asked the question, "Who do you consider Texas Metal Artist of the Decade?". Many names came up but the consensus was clear as multiple people tagged Joshua Lopez almost instantly. No single Metal Artist in Texas has impacted more Texas bands while simultaneously putting out ass kicking Texas Metal Music and representing not only his local scene but every metal act in the Lone Star State on world stage.

Texas Metal United wanted to spotlight and give back, in a sense, to a man that has done so much not only for his own career and reputation but for so many people in the Rio Grande Valley and Texas as a whole. A small token of our appreciation...if you will.

TMU: How long have you been a musician?
JL: Since i was 5. So 21 years now.
TMU: Producing?
JL: I've been producing bands for about 10 years now.
TMU: How many artists have you worked with?
JL: I've worked with over 50 bands/artists local and around the world
TMU: Why did you decide to take this route? Did it just happen?
JL: IDK. I just really wanted to dig my roots deep into the RGV, so I focused on learning as much as I can and building my ear while at the same time trying to work with as many local bands that I could. Had to start gaining as much experience as I could.

Many of the people on the TMU team know Joshua Lopez personally & can tell you that there aren't many people out there with his knowledge and passion to learn more and more every single day while already being the best at what he does. He'll make anyone feel comfortable and at home in his studio...He'll teach you things you otherwise would have never known about your own music and you walk away feeling smarter and privileged having been able to acquire such knowledge from someone who has been working so long to learn. He's willing to just give it away for the sake of a GREAT product and having you leave his studio that much more enlightened feeling good about what you just layed down inside Widowmaker Studios.

Music is part of his DNA. From the age of 5 Joshua learned as much as he could about guitar, bass, drums, song writing and music production. While in middle school Josh performed with bands at local bars and by the end of high school had recorded and released several singles with projects he recorded himself. After high school, Joshua continued to hone his music production and engineering skills recording local bands while performing with a cover band and original acts.

In 2016, he opened his own studio. Widowmaker Studios, recording and producing acts from multiple genres including national touring act, Immortal Guardian, where Josh is currently playing bass. In 2017 Joshua joined the board of Texas Music Helps a 501c3 non-profit organization focused on raising funds for local charities. He continues to be an instrumental part of the RGV/South Texas Border Music movement and has produced many of the acts from this area. Joshua plays in the bands Immortal Guardian, Levatio and Sonic Boom.  He frequently releases new videos and product demos online featuring material from his bands and Widowmaker Studios while constantly honing his skillset. Affectionately dubbed "The Wizard", you might say Joshua Lopez has more than a few tricks up his sleeve.

Joshua has recorded, produced or played with the following bands: