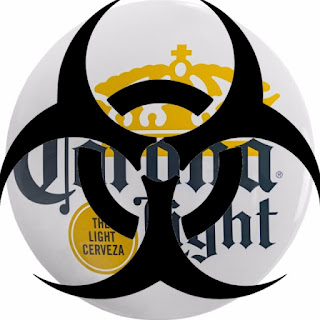 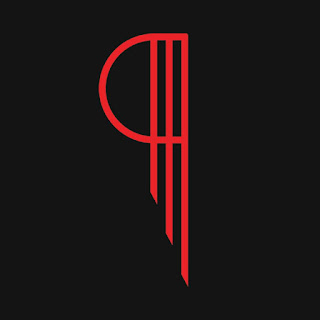 1. Tell us who you are with and what you've been up to in 2020 so far.
¶: I'm Paragraph Taylor, guitarist of ManifestiV from Vallejo CA. We moved back to Dallas (where we'd met 2011 in mortuary school) early 2016 as a more central base for touring the US, closer to friends & family here. Our most recent tour was in 2018, and we got a place in North Dallas at that year's end to begin writing our next full-length. We played a slew of Texan shows testing some new songs live at the beginning of 2020, then when the lockdown came about, we again focused on writing. On April Fool's, I put out a score to the Little Spark Films horror short The Torturer out this summer, and amidst writing for both ManifestiV & Secret of Boris (my other band) I have been exploring video editing & more intricate effects for our sounds.
EvE: I'm EvE, vibraphonist of ManifestiV and also visual artist. So far in 2020 I've been focusing on finishing our animated music video and beginning our graphic novel, U-25 (Universe 25).

2. What plans have the virus changed for the band?
¶: Aside from a cluster of regional show cancellations including near SXSW in Austin, and a Central US tour with System 6 from Kansas City scheduled for May now postponed for October, surprisingly not much. Our intent stopping tour here in Texas was to write, so once again the Universe gave us what we needed, not necessarily what we wanted. The more time spent writing & learning the creme of the crop, the higher eagerness to play new material live rises.
EvE: It has shifted our focus away from live performances and instead led us to write more music and create more visual content.

3. Do you think the virus in the big picture is help or hindrance for bands?
¶: I've noticed it's helping a lot of bands & members thereof not too tech savvy really wrap their head around streaming technology, internet promotion, online fan engagement & the like. If the virtual reach was at one time fringe & cutting edge, now it's more the norm. We have fans worldwide in Europe & Asia that have yet to see us live that, due to the pandemic, have no excuse to miss us now! Plus, though it's not in the flesh, it's a lot easier than traveling overseas with our gear, for the moment.
EvE: I believe that all depends on what that band's goals and needs are. For us, it was both, for it helped us develop more songs to add to our repertoire, however it did eliminate our ability to play live and it did shut down our ability to tour. It is quite annoying however to see the gas prices hit a historic low and yet our tour van sits immobile and silent. 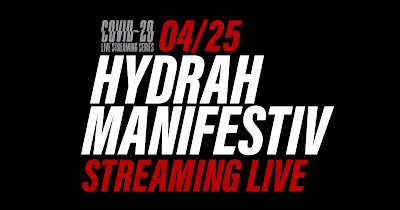 4. Are you doing live streams or special videos / releases for your fans stuck at home?

¶: Absolutely. This Saturday 4/25/2020 we're part of a series that begin shortly after lockdown called COVID-20. It's put on by a Euro/American label called GIVE/TAKE, home of friends of ours Bijou Noir who remixed our song "Baroque" on last year's 3vE, and an old friend & tour mate of ours, KPT. G/T's Twitch account hosts the show 8PM 4/25 at http://givetake.life/COVID-20 with us first, followed by Hydrah from Los Angeles. We also released a song called "The Curve" soundtracking a video compilation of empty streets from three usually dense places we've called home, Dallas LA & San Francisco, on YouTube and embedded in our http://ManifestiV.com index page.
EvE: The "Just Wait" animated video will be released sometime in the next few weeks.

5. What are you doing in quarantine that would surprise people?
¶: Interesting question! We took a coffee sabbatical, which is sack-religious because a) it's our staple as we don't drink alcohol anymore & b) y'all's name, haha. Sleeping schedule rotated completely around the clock; now we're back to where we started.
EvE: We are in the process of beginning a permaculture farm in Canton TX. 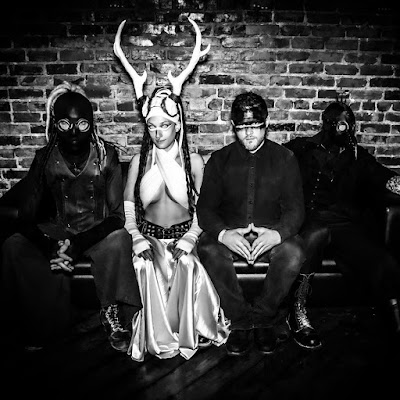 6. What has been your mainstay, music or netflix?
¶: Music, easily. Been avoiding Netflix like the plague, which was usual but more so now. New Nine Inch Nails, Bloodied, Squarepusher, Paper Street, bvdub, and more have kept our sanity & inspiration. I've watched lots of YouTube videos on tiny houses & permaculture for the future, and festivals for the past.
EvE: Music and painting has pretty much defined my time in quarantine. I have been in close contact with our animator and progress on the music video has not been interrupted at all, if anything, it has been accelerated since most of our live shows have been cancelled.

7. Will you think differently about touring? And about groupies?

¶: Not really. The privilege of touring early in our band's history means we're building small followings all over, right about at that 50 person mark for our favorite places in the video for "The Curve" alongside Denver, Seattle & Portland OR. We see those size venues rolling out & catering earlier to performers & concertgoers than bigger venues & events. We've always kept our masks on for groupies, so maybe now they'll follow suit! Ha ha.
EvE: I will definitely appreciate the time on the road more now, not that I haven't before.

8. Do you know anyone personally affected?

¶: If you mean diagnosed as a coronavirus carrier, no. But everyone is personally affected in some form or fashion. We had big plans for Burning Man this year which cancelled as a whole for its first time ever, so that's both hugely devastating & liberating, as it takes a month or so out of the year that we get back now. We're extremely grateful to have been able to attend the Burn most of the 2010's, even playing a few times, so we'll treasure those memories extra hard now. Dunno anyone that didn't have big plans affected by quarantine & social distancing. A humbling lesson in planning: try not to? Ha ha.

9. Do you think it's more important to blame someone for the virus or to get it solved?

10. Last question would you rather cover yourself in honey and throw yourself into a bees nest, or see your bassist naked?

¶: Though I love bees, I'd have to go with Kevin, our plague doctor mask wearing player of 5 strings of fury, naked. a) we've had an indescribably long & intimate history already and b) I'm a nudist at heart so nothing out of my ordinary there. Plus his birthday was yesterday, so it feels wrong to not choose him naked!

Our take on current affairs "The Curve" out now.Watch the video: http://youtu.be/R9j_DneapzAName your price: ManifestiV.bandcamp.com/track/The-Curve