THE TRASH WITH : PIT LORD

ANOTHER GREAT INTERVIEW.......... NO PICTURES AS REQUESTED 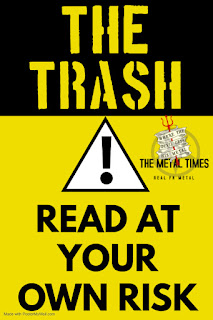 Dan - I am smoke-master guitarist, vocalist Dan Freitag of the group known as Pit Lord.  You like barbecue? You like Death Metal? Either or both get yourself a sample plate of some thick juicy music.

Lyndon - I’m Lyndon Ehlers, bassist/vocalist of Pit Lord. Death Metal has been saturated with everything but flavor and grease. We’re here to remedy that by smoking new life into the genre. Never boring, never flavorless.

Dan - We are barbecue death metal.  Tasty riff fueled old school hot and sweet death metal served up on a silver platter for all to enjoy.

Lyndon - Death Metal from flesh to bone.  We take influence from tons of bands we grew up jamming together since high school.  Cannibal Corpse, Bolt Thrower and Skinless just to name a few.  On top of that, our unbridled enthusiasm for grilling and barbecuing meats.

Lyndon - As record collectors we’re always in favor of the physical side of things.  Digital media has an important role to play but theres nothing compared to drippin’ grease on a freshly opened slab of WAX

Dan - Why eliminate when you could marinate? I accept all forms of audio.

Dan - I like many metal heads grew up with a love for Metallica which led to Megadeth, Slayer and so on. Ever since I heard metal I knew I had to participate in one way or another. I grew up in a fairly musical home and played trumpet and piano in grade school which also helped get me into playing but didn’t get me absolutely hooked until I picked up guitar. It has paid off in ways much more important than money.  I’ve forged life-long friendships and experienced pure joy in live performance on many occasions. I’ll never quit making music even if I’m the only one listening.

Lyndon - I grew up being made to learn piano and later on joined orchestra out of sheer curiosity. HATED IT. Somehow I was still compelled to be in the position to make my own music.  I can’t say there’s a specific reason, Ive just been compelled to do it.  Once I started doing it live, that was it.  I guess its an addiction.  Like skydiving but not as stupid.  Or more stupid? I guess it depends.

Lyndon - Ive honestly not noticed that to be the case.  I certainly don’t believe any musician should be ignored based on gender or race or whatever.  Though political climates are always going to dictate those kind of things.  I would hope that if you feel your music is not getting the right amount of attention its up to you as the musician to address that, rather than blame it on some sort of “unfairness”.

Dan - Gender doesn’t change the tenderness of the cut in my opinion. Good is good no matter the gender.

Dan - Possibly in the mis-informed vegan worlds but all are welcome at our table.  We have friends from all walks of life.

Lyndon - Our music may sound violent and aggressive but the message is positivity and enthusiasm.  You might get punched but we’re gonna feed you afterwards and have beers.

Dan - Sing about what you believe in. We believe in BBQ. Again, if it’s good it’s good.

Lyndon - Music is fun for us. That’s what we get out of it and thats what we want to promote.  Personally I feel pushing an ideology with your music is kind of gross, but I would never tell anyone what they can and can’t do with their art.

Dan - Our message is simple and clear. Grill, smoke, bake and fry with the Lords blessing.

Lyndon - Have fun and don’t take yourself or anyone too seriously.   Also learn how to smoke pork butt.

Lyndon - Figure out what makes your band unique and run with it. Double down on everything, while making people care about what you’re doing.  Also spend money without expecting to make it all back. Merch, gear, spatulas with your band logo on them. Whatever it takes.

Dan - Grind, grind, grind, grind… then get lucky. Same as it ever was. The stage has just shifted. Also, come to terms with the fact that you will more than likely not make it. Find peace in that and have fun. If it catches on run with it.

Dan - Entertainment mediums come and go but the weekend barbecue will never fade. We are the eternal flame.

Lyndon - There’s a lot of serious faces and crossed arms in death metal and we’re trying to lift that up a bit, while still paying homage to the genre.

Lyndon - Nope. Never. Get outta here with that nonsense.

Lyndon - It certainly doesn’t come together without both. Especially if people are giving you money.  Don’t rob those good folks by sucking.

Dan - As an homage in a cover song, yes. However we will most likely never have ghost writers or anything of that sort.

Lyndon - Yeah, we’re okay with covers every now and then, but we keep this shindig in-house.

Lyndon - Death Metal has used violence and graphic imagery to sell music, I feel its the same thing.  If you can sell it, whatever the means, good for you.

Dan - Scumbags should be persecuted. Nothing in sex drugs and rock n roll says anything about being a shit person.

Lyndon - This is definitely a different world than when sex, drugs and rock n roll was the reality.  Maybe just try to be a professional and decent human being. I mean, definitely do acid and have fun, but don’t be a dick.

Lyndon - Thats impossible to answer really.  The closes I can get is it lies somewhere between Morbid Angel and Bolt Thrower.  That’ll probably change next week though…

Dan - Yeah too hard to answer. Gun to my head I’d say Dimmu Borgir… or Fear Factory… or Slayer. Too hard.

Lyndon - Probably a janitor. I’d actually still like to be a janitor. I can sweep some floors like its nobodies business.

Dan - Either running a company or in prison.  I don’t know. I’ve kinda never not been in a band in my adult life.

Lyndon - I don’t follow any sports. Some combat sports but not religiously.

Dan - Team Zero? Chris Cole and Jamie Thomas. I never followed traditional sports but was an avid skateboarder as a kid. Creature skateboards has been doing some killer stuff more recently as well.

Lyndon - I don’t have many. Its mostly about lazy people in bands. People afraid to do work themselves and really try to do something rather than sit around be worthless. Eat a steak and get things done.

Dan - I don’t have many either. I guess I’ll be the the average humbug and complain about the way streaming has eliminated a ton of revenue for bands. I love technology but I believe there is a better way.