“
In it she deftly weaves hard rock energy with Middle Eastern scales and vocal acrobatics. An amalgam of genres and vocal style, Barakat isn’t afraid to go where she thinks the music should take her.” (PARADE MAGAZINE)
“When trying to describe an artist like Hanna Barakat her voice and talent are such a given that it frees the listener to embrace the musical journey she takes you on. She is not afraid to step out of the box from song to song while still following her vision of song oriented rock layered in a luscious soundscape of melodic instrumentation and vocals. There is a message, emotion, and uniqueness within each song that transcends trends while still embracing the familiar.” -John Moyer (Disturbed)

New York, NY: Austin-based, hard/alternative artist, Hanna Barakat, announces her new  album, Siren, showcasing “a vocally powerful performance by the Texas-native driven by compelling songwriting and thunderous production." (Substream Magazine) Born in Texas to a Lebanese father and American mother,  Barakat combines a variety of influences. "While proudly paying homage to her roots, Barakat has cultivated her own style that merges Arab-Oriental influences with her love of rock music for a stunningly unique and original sound." (Metal Nexus) Pure Grain Audio declares, "Artists come and go like skin cells but, sometimes, there are those that truly stand out for their immense talents. Barakat is clearly a member of the latter.”
The album was produced by John Moyer, bassist from famed hard rock band, Disturbed, and mixed by Martin Nessi (Michael Jackson estate, Ariana Grande, Josh Groban, Celine Dion, Andrea Bocelli, Ricky Martin, Kelly Clarkson), and mastered by Ted Jensen of Sterling Sound (Disturbed, Evanescence, Three Days Grace, Breaking Benjamin, 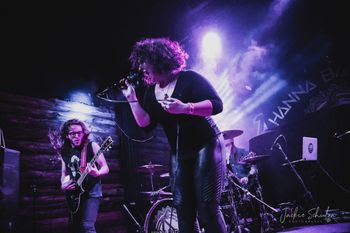 Halestorm, Pat Metheny).
Barakat beautifully describes the inspiration behind the album:
“I chose the title, Siren, for my debut record, after John Moyer and I produced our final song together, which happened to be “Siren.” The power of the music and the lyrics filled me with such fire. It motivated me and inspired me to take this next step in my journey with such confidence. Though the song references the mythical sirens of the sea, I loved the idea of a double meaning: an actual siren, warning call, alarm! The songs on this record were written over a span of 10 years. These songs have been my comfort and my therapy, as I’ve journeyed this world, witnessed injustices, engrossed myself in my ancestral culture, grown within myself, literally travelled the globe, loved, lost, failed, loved again, and struggled to reach the place where I am today. I want to bring awareness to these situations, not by forcing any political agenda, but by pushing for love, understanding, and acceptance of all the other humans walking this earth together. Throughout history, there have been unnatural walls physically erected, or socially accepted and perpetuated, in order to divide people. I want to tear those walls down. All of them. Through my music, with rock guitars, heavy drums, deep rhythmic bass lines, and my intricate vocal melodic lines and punchy harmony stacks, I have chosen to forge Arab instruments like the oud, kanun, frame drum, riqq, into my sonic landscape, where I feel they so naturally and appropriately belong.”
MORE ABOUT Hanna Barakat: 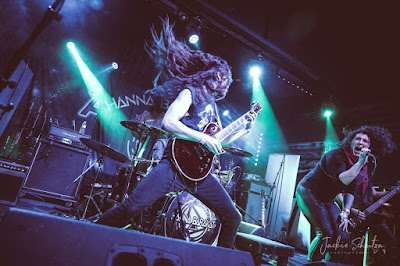 Debuting her singing talents as a child from under dining tables at family gatherings, Hanna’s innate passion lead her on great adventures, opening doors to opportunities such as performing at the TD Bank North Gardens Stadium with the New Kids on the Block for their comeback tour, facing a sold out 37,000 person stadium.
While attending Berklee College of Music, Hanna was finally able to dive into Arabic music through the middle eastern fusion ensemble. From there, she performed with distinguished artists such as Simone Shaheen, Bassam Saba, Erkan Ogur, and Laço Tayfa’s Hüsnü Şenlendirici. Hanna personally directed and performed in the group representing the Middle East in the Berklee International Folk Festival. Hanna also performed and worked alongside artists such as Paula Cole, Don Was, Philip Bailey, Lailah Hathaway, Burt Bacharach, and many others. It was at that pivotal time in Hanna’s musical journey that she realized she had to find a way to join rock music, which she loved so much, with influences from the Arab world, whether that be through arab instrumentation, the language, or with ornamentation and infections in her vocal melodies.
Barakat’s unique style merges Arab-oriental influences, as well as hard rock, for powerful and genuine connections with her audience. Socially and politically charged, her passion-driven compositions and performances often add eastern ornamentation, as well as other musical influences to transcend language and borders to touch the heart. “It is amazing to see musicians from various backgrounds, religions, mindsets, prejudices, and upbringing, that would normally separate them, join together and produce such brilliant sounds,” says Barakat.  “Those unique situations are the fertilizer for peaceful soil, and this Earth needs much more of that.” She aims to connect with others, both those displaced from their homelands, being influenced by multiple cultures around them, while simultaneously reaching mainstream audiences that appreciate writings of personal encounters, relationships, life issues, and, of course, love. 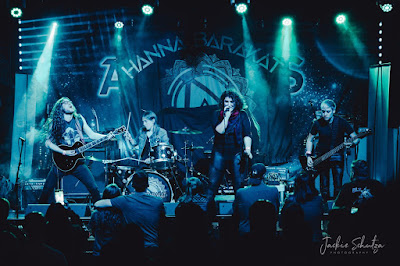 After graduation, Hanna headlined at the Boston House of Blues main stage before moving to Beirut, Lebanon, to pursue two of her true loves: music and the Arabic language. Hanna was well received and performed her original rock fusion music throughout the region, namely at Beirut’s Hard Rock Cafe. From there, the world has been her stage, traveling, and performing across the Middle East, Canada, Mexico, and the United States, where she currently calls Austin, Texas, home.
Follow Hanna Barakat Online:
http://www.hannabarakat.com/
https://www.instagram.com/hannabarakat/
http://www.facebook.com/hannabarakatmusic
http://twitter.com/hannabarakat
http://soundcloud.com/hannabarakat
For All Media Inquiries:
WES J METALCOFFEEPR@GMAIL.COM 405-693-3262
Posted by Wes J at 9:59 AM