MERCYLESS The Mother of All Plagues 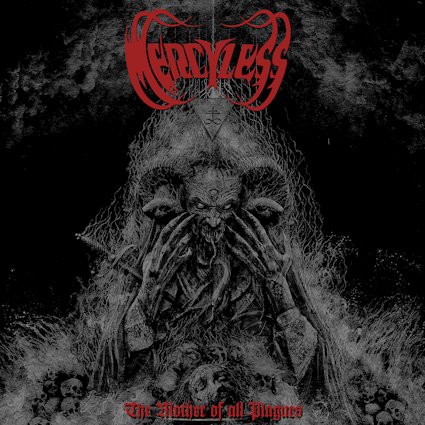 MERCYLESS
The Mother of All Plagues
Overview
On the 33th year, the 7th gate opens, bastard son dies at last and MERCYLESS spits its darkest album ever on the face of his p(ri)ests that contaminate mankind since way too long.
Seventh album in 33 years, the aptly-titled “The Mother of All Plagues” amidst those troubled pandemia times even though it’s been written and given its title back in 2018 already, is the proof, if any was needed, that already deep in its fourth decade, MERCYLESS still rages on, stronger than ever before, against the crucified one and the holy ghost, releasing their darkest and most hate-filled album ever ; most probably their best since cult 1992 debut “Abject Offerings“!
Comparing religious belief to the infection of minds and the contagion spread by clergies to a plague, “The Mother of All Plagues” is standing fierce, proud to have been, equals to the horned one, banished from Heaven, calling on the infected masses to break their mental chains and bring back with them the severed head of their oppressor.
Produced at VAMACARA studio (OTARGOS, LOUDBLAST, SAVAGE ANNIHILATION…), “The Mother of All Plagues” is darker and rawer than any of the band’s previous releases, adding to the songs’ oppressive and hateful feel, an even darker dimension, topping it all with outstanding artwork courtesy of Nestor AVALOS (BLOODBATH, DARK FUNERAL, BLUT AUS NORD…).
Forever … rival of the Nazarene!
Track List
"The Mother of All Plagues"
Infection
Rival of the Nazarene
Banished from Heaven
Bring Me His Head
Contagion
Laqueum Diaboli
Descending to Conquer
Inherit the Kingdom of Horus
The Mother of All Plagues
All Souls Are Mine
Litany of Supplication
"Sovereign Evil" bonus LP / CD
The Third of the Storm [HELLHAMMER cover]
In League with Satan [VENOM cover]
The Exorcist [POSSESSED cover]
Go to Hell [MOTÖRHEAD cover]
Line-Up
Max OTERO – Guitars & Vocals
Gautier MERKLEN – Guitars
Yann TLIGUI – Bass
Laurent MICHALAK – Drums
Guests
Stéphane VIARD (ex-MERCYLESS), guitar solo on “Laqueum Diaboli” and all guitars on "Go to Hell"
Florent SANTINA (ABYSSAL ASCENDANT), guest solo on “The Mother of All Plagues”
Michel DUMAS (AGRESSOR) and Anthony DERYCKE (CATACOMB), guest solos on "All Souls Are Mine”
Credits
"The Mother of All Plagues": Mixed at VAMACARA studio
“Sovereign Evil” mixed at PSYKRON studio
All songs mastered at VAMACARA studio
Artwork by Nestor AVALOS
Layout by Emmanuel PLISZKE
Executive Producer: Nicolas WILLIART for XENOKORP
All songs reproduced with kind permission of LES EDITIONS HURLANTES except all “Sovereign Evil” songs by their respective publishers