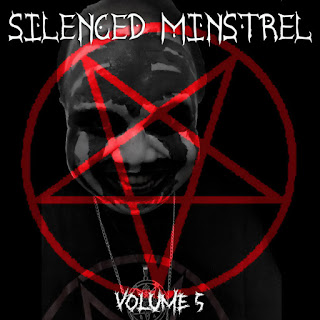 Silenced Minstrel (age 44 years, born Saiful Nizam Shukor, 28 th March 1976) was a full time singer, songwriter musician from Kuala Lumpur Malaysia. Been playing music since 1991 he co-founded HALUN, a gothic black metal band back in 1996, produced several demos, one EP and one LP before the badly deformed monstrosity was laid to rest in 2015. Writing and producing mostly in his bedroom studio nicknamed “Sky Panacea Enterprise” he spent the entire 2016 gathering writing and recording materials for his debut album “Volume 1” choosing to name it as such as to not make it sounds too rockstar-ish.

“Volume 1” is a combination of melodic gothic stuff mixed with thrash, death and doom metal riffs and black metal atmosphere, utilizing the most basic of guitar effects, cheap keyboards/ synthesizers and MIDI orchestra throughout the entire album to produce something that he’d always wanted to do: anything that didn’t sound like his former band! The album is completed in September but it be long after the production of the second album was underway when that album graced the scene...

The second album “Volume 2” saw some maturity in his songwriting, the MIDI orchestra part ditched altogether and it also saw a fair amount of rough edges deliberately highlighted in the mix, and a lot more gothic atmosphere throughout than before especially in the lyrics department, where he wrote songs about the occult, immortality, vampirism and forbidden love between the mortal and the damned, also some cryptic poetic inclinations thrown to the mix just for the heck of it.

The third album “Volume 3” saw him moving ever closer towards a more melodic black metal sound than the old one, this time the long ditched MIDI orchestra element restored along with some double-layered bass guitar tracks and even gloomier atmosphere than before, reflecting the state of his mind, body, spirit and environment that he’s at during that period of time; with traces of anger, hatred, betrayal and vengeance gracing every song in the album (he fully recovered from his decade long clinical depression that same year).

The fourth album “Volume 4” saw him disposing of all the gothic melodic stuff and straight into just vocals guitars bass and drums, trying to go as dry and as harsh as he can, tackling on darker themes like deviant spirituality, Satanism, atheism, philosophy and dark fantasy. Fast tempo is the name of the game; the drums gained more prominence and absolutely no melodic stuff present on this album.

The fifth album “Volume 5” saw the further development of sound and direction from the previous album, adding also an orchestral style instrumental black metal song as the last track of the album, a song that hearkens back to his old days in HALUN.

The artist is currently occupied promoting his new album, gathering materials for the sixth album and also working on his other band “Shadowed Grace” playing New Age Scifi Fantasy Instrumental Synthesizer music. Silenced Minstrel is unsigned and is looking for exposure, a recording contract and developing fanbases all across the globe.

Check out the video!