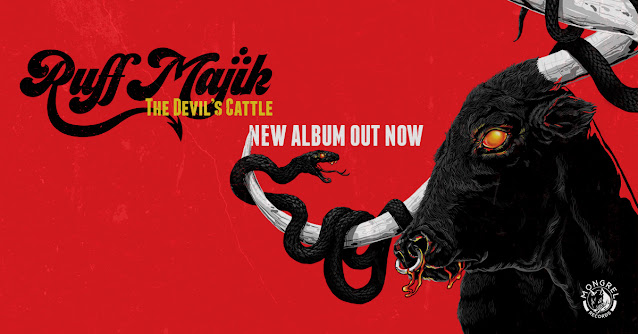 Starting an album with the sound of an engine revving is risky. Pull it off and your band comes across like a gang of hard living, free spirited biker boys, but get it wrong and you’re more likely to remind people of a dad having a midlife crisis. There’s a fine line between living like an outlaw on the open road and stacking your brand-new Harley into the back of a Transit van on the way back from the dealership. Not everyone on a motorbike can be in BLACK LABEL SOCIETY and if you get things wrong, it can be painfully cringeworthy. Thankfully, RUFF MAJIK have more in common with Zakk Wylde’s lot than the local boring-youth-compensation-club.

These South African lads deal in low slung, dirt-crusted rock ‘n’ roll and sound like they regularly shake miles worth of road-dust from their clothes before playing. The Devil’s Cattle is their latest full-length, following hot on the heels of last year’s Tarn and it’s a blast. The lyrical themes include substance abuse, isolation and failed relationships, but you wouldn’t guess that without paying close attention. It’s a pint-downing, hell-raising good time and despite the grim subject matter, its hard not to grin constantly throughout.

Take All You Need Is Speed for instance. It has all the down-tuned riffs, slack-jawed vocals and bluesy melodies you’d expect from UNCLE ACID AND THE DEADBEATS, but it’s played much faster

Songs like Jolly Rodger and Swine Tooth Grin are pure, good time music. This is music with dice tattooed on its arms and cigarette burns on its jackets. It’s toe-tapping, life-affirming rock and its would make the perfect soundtrack to a Johannesburg bar brawl where everyone makes up and shares drinks afterwards. Heck, even the groovier numbers have more vitality than you’d expect from a band this grimy. Gregory and the title track dial back the pace a touch, but there’s a barely restrained vigour here and the bass constantly threatens to explode into life.

This does mean that The Devil’s Cattle can be exhausting; listening to it is like trying to run on a treadmill at full whack for fifty-two minutes and the human heart can only beat so fast. When you have the fuzzed-up power chords of Who Keeps Score blasting through the headphones though, it’s amazing how far you can push yourself. There are a few breathing spaces like the mid-paced Lead Pills And Thrills scattered throughout, but for the most part this is full-throttle and its hard to keep up.

So yes, they probably do have choppers in their garages back home. Even if they don’t though and have to hitchhike to gigs, RUFF MAJIK have made a convincing statement with The Devil’s Cattle. It’s an authentic slice of whiskey drenched booze-rock. Imagine a stoner rock band who spent all their drug money on energy drinks and you’ll get the right idea.