THE METAL TIMES : Hexecutor - Beyond any Human Conception of Knowledge 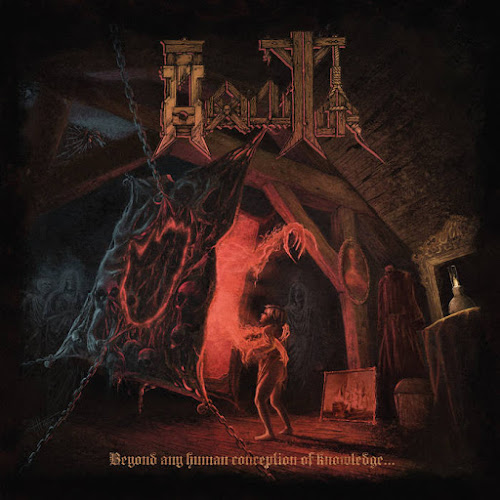 It’s been four long years since HEXECUTOR released their shockingly masterful debut album, Poison, Lust and Damnation. The “shock” wasn’t so much that the French quartet came out of nowhere – indeed, they’d made waves in the underground with their debut demo in 2012 and especially the Hangmen of Roazhon EP two years later (which DYING VICTIMS reissued on 12” vinyl in 2018, to meet demand) – but rather that there existed a band putting an undeniably authentic yet also unique twist on classic mid-‘80s speed metal and thrash. HEXECUTOR weren’t trying to reinvent language; they were simply trying to expand the lexicon a bit, and they did so with astonishing aplomb on Poison, Lust and Damnation.
But, now rested (and wild!), HEXECUTOR return with an even bolder record in their long-awaited second album, Beyond Any Human Conception of Knowledge. If its no-less-considerable predecessor pushed traditional tropes, Beyond Any Human Conception of Knowledge topples them altogether! It’s all recognizably HEXECUTOR – and immediately, charismatically so – but swirling in their cantankerous cauldron of old Slayer, Razor, Destruction, Sepultura, and Merciless is a passion for classic hard rock and heavy metal and coated in the feeling of Bathory's Blood Fire Death and Manowar's Into Glory Ride. Thus, this second strike is a much more EPIC one, all without striving to be “epic” in the pejorative sense. It’s all twisted with grace and gnarliness, in equal measure, as one will find filtered traces of Thin Lizzy, Uriah Heep, Blue Öyster Cult, UFO, and even the Eagles as prominently as those of Deströyer 666, Absu, Gospel of the Horns, and Vomitor. HEXECUTOR even touch upon just-as-classic black metal and death metal mainstays as Morbid Angel, Sweden’s Dawn, and early Necrophobic, Darkthrone, Gorgoroth, and Satyricon…but again, simply hearing Beyond Any Human Conception of Knowledge is witnessing the band’s widescreen yet still-wild ways. Slowing down doesn’t mean wimping out, and diversity can be a wondrous thing when handled with care and class. In a word, magickal!
Then again, a recording as momentous Beyond Any Human Conception of Knowledge is underpinned by a deep and thoughtful thematic, relating directly to HEXECUTOR’s homeland. Brittany is a peninsula located in the western part of France surrounded by the English Channel and the Atlantic Ocean. Its particularities come from its geographic characteristics and from a mix of different cultural influences throughout its history (Armorican, Celtic, French, etc.). Having been an independent kingdom and then ruled as a Duchy apart from France for centuries, Brittany has its own traditions and its own languages: Breton (finding its origins in Welsh and Cornish) and Gallo. The progressive evangelization of Brittany affixed Christianity onto the oldest pagan customs, leading to the development of a rich folklore in which magical powers of nature, spirits, sorcerers, korrigans, and the personification of entities such as death (well known under the name of Ankou) met with common religious figures and its popular antagonists: Satan, demons, and a countless amount of devils and malignant forces.
As heavy metal is a great medium to relate legends and epic stories, HEXECUTOR chose to glorify the beauty of their folklore with a concept album based exclusively on myths, factual history and fantastic tales kept alive by the oral tradition and collected by authors, folklorists, and poets such as Anatole Le Braz, Paul Sébillot, or François Cadic.
Each of the eight tracks on Beyond Any Human Conception of Knowledge (one being sung in French) is based on a specific local thematic: the White Lady of Trecesson, the ghost of a young lady buried alive in a wedding dress by her brothers for a reason that remained mysterious; the lost City of Ys, magically engulfed, and the unholy figure of Dahut, daughter of King Gradlon, banished under the waters of Douarnenez's bay and turned into a siren for her carnal sins; a glorification of the heroism of the Saint-Malo privateer Robert Surcouf; an insight into the legend of the Agrippa/Ar Vif/Egremont/An Negromans, a book of spells signed by thousands of devils and marked by the hoof of Belzebuth himself, acting as a living entity with its own will, illustrated on the cover artworks (among other themes related to this album and to their past releases); the curse upon the two calvaries of Kerguh, called Cross of the undead, where, each night, a legion of damned spirits rise out of Hell and dance under the command of Satan; the tale of the plague personified in the form of an old woman travelling to the village of Camors to spread death.... “Brechelian” is an instrumental ode to the magnificent Paimpont forest. No words are needed since most legends attributed to this place depend on the historicity of King Arthur or came from marketing campaigns to attract tourists. Anyone that would spend a night here would feel its indescribable force and understand why this had to be instrumental.
It bears repeating that Beyond Any Human Conception of Knowledge is a momentous event, and it’s suitably graced with amazing artwork courtesy of Skelethal’s Jon Whiplash. HEXECUTOR here have delivered a modern classic!