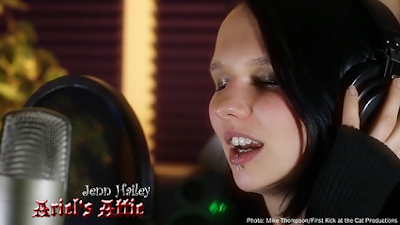 1. Please tell us about the history of your band and its members.

The band that became Ariel’s Attic actually started back in 2013 after guitarist Mike Olson released his second solo instrumental CD (Rise To Your Knees, 2012), on which he had recruited Bob Ross to play bass. Being huge fans of female-fronted metal the duo had a vision of adding a powerful female vocal and a big twin-guitar sound to form a new project that would be a natural evolution of the music on RTYK and the hunt for the ideal lineup began. After auditioning what seemed like countless singers over the course of nearly two years, Bob heard Jenn Hailey singing at a party in 2015 and asked if she’d consider the job. Jenn sent in a demo of herself singing into her phone (!) and it was a done deal. Guitarist Gary Campbell was brought in shortly thereafter, Bob and Gary had been doing local gigs around Ottawa with a metal cover band and it was a no-brainer to bring him into Ariel’s Attic. We haven’t looked back since.

Ariel’s Attic was the name of a track on Mike Olson’s first instrumental CD (A Fractured Fairytale, 2010). We just thought it was a cool name for a band.


3. Where is the band based out of and what is your music scene like there? Are there any local bands you could recommend?

This one isn’t so cut and dried. Three of us (Jenn, Gary, Bob) live in Ottawa, Canada while Mike is in Sarasota, Florida. We have the writing and recording part down but we’re strictly a studio band for the time being while we try to work out the logistics of getting this music up on a stage.
The Ottawa live music scene is quite vibrant. We have lots of venues catering to all genres, and hard-rock/metal is well represented. Some local bands we really like are Ivory Knight, Audio Rehab, Trigon…there are so many.


4. How would you describe your style?

We like to call it ‘raw precision’. We’re not really sure what genre to classify ourselves in, we’ve done everything from symphonic metal to something we made up that sounds like southern bayou doom metal. We even have Jenn doing skat on one track. Progressive metal? Symphonic Metal? We don’t know, it just rocks.

5. What have you released so far and what can someone expect from your works?

Album: Garden of the Gods 2017
Singles: Hallelujah (2016), The Show (2018), Blackmore Road (2018)
As to what someone can expect from our music, we like big music with grand concepts, with intricate lines and counter-melodies, frequent dynamic shifts and ambitious arrangements, but we also like to headbang. Think Nightwish meets Rush at the Savatage concert and they all jam backstage after the show.

6. Do you have any new music in the works?

Yes. We are writing the follow up to Garden of the Gods, along with some other projects that struck our fancy. Two of the tracks we plan to include on the next one are available as singles (Blackmore Road, The Show)


7. How about playing shows and touring, have anything planned out?

We have no touring plans at this time. Given the geographical challenges we face the logistics would be a nightmare. We hope that changes in the future.


8. What plans do you have for the future as a band?

Right now we’re concentrating on writing the material the new album. Our short-term goals are to get our name and music out there as far and wide as possible and establish a strong enough base from which we can spring to the next phase of this adventure.


9. Where can we listen to your band and where can we buy your stuff?


10. What is it you’d like a listener to remember the most when hearing your music for the first time?

What we ideally would like is for listeners to think that they need to listen to it again, and there will be things they hear the second time that they didn’t hear the first time. We like to layer stuff, there’s a lot going on in most of our tracks and one reason we do that (besides the obvious fact what we like to do that) is so the song can offer the listener something new every time they listen. Sort of like the gift that keeps on giving ;)