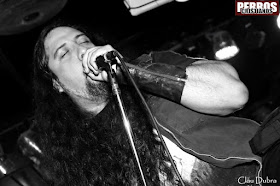 Since childhood I am a big fan of metal and clearly one of my great influences is Mr. Bruce Dickinson since I am a big fan of Iron Maiden, that is why maybe I am quite outgoing on stage, as I grew up listening to them and seeing him to him sing. Another one that undoubtedly marks my passion for singing using growls is Mr. Phil Anselmo from Pantera, since they were my first imitations in attempts to shout something heavier. Another, already entering more field on what I do now, is Fernando Ribeiro from Moonspell on whom I rely a little more to sing clean and guttural ... Nergal from Behemoth I also believe is a strong influence on me, in what I often It is guttural, as is Seth Siro Anton from Septicflesh ... and I cannot ignore one of my greatest references when singing something more black metal that is Mr. Ihsahn whom I consider one of the greatest musicians I've heard in my life.

Without a doubt, all of the above.

Music is an art and has no limits, it is like comparing abstract painting and saying that they are only stains on a canvas ... it happens that it is not the massive way of doing things so any fool can give them criticism and talk stupid things about our art. 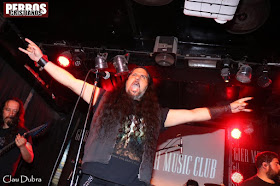 Over the years one is finding ways that are becoming more comfortable, at first I screamed and did not last half the show since I took everything I had outside in a very uncontrolled way, but one finds the proper way of singing and At least in my case, I'm dosing more force live to be able to do a complete show at the same level ... then you end the show talking just the way you arrived, you drink a beer and smoke a cigarette without problems hahahaha.

Before I never worried about that but recently I had a specialist check up who gave me several tips to perform a routine during the day and to get on the stage much more prepared, such as drinking water all day to keep the vocal cords hydrated , do not eat before going to sleep to avoid reflux that damages the strings and vocalize 20 min before each show to warm up ... I have done so far and clearly has given excellent results. 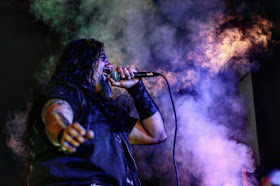 As I said before, I think the performance pays off and allows you to maintain the level of your show, nobody wants a guy who sings half of the show with all the power of the world on the stage and in the end is overshadowed by his own shadow.

I think the guy who sings in Tool is very overrated and I have a bad impression also in Mr. Akerfeldt of Opeth whom I consider a clown ... another one that disappointed me a lot was Martin C. Bell of Fear Factory since he sings horrible live . I loved Jill Janus de Huntress's singing a lot who committed suicide recently ... amazing band and she had a spectacular voice that the world never gave the deserved credit, I loved her voice.

I think I can't give you only 5 so I will give you the ones that are most important to me: 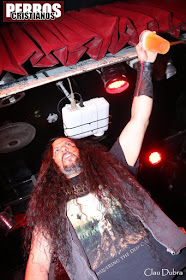 10.Who do you love to listen to that would surprise people?.
Throughout Latin America it is full of great bands that surely if they were put on a great European label, they could be sales records or make great tours so I think they should put the focus on that.

11.If you could remove the autotune from any singer who would it be?

In the metal there is no such shit so we know well who sings well and who does it badly.
Wes J at 5:15 PM
Share