A: My name is April Rose and I play for Auditory Armory. 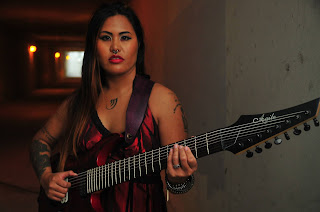 2.Who made you want to pick up the guitar:

A: Actually, the metal band Kittie.  They were popular when I was 13 years old.  They are badass female rockers – I wanted to be like that too!

A: I started to take guitar lessons when I was 13 years old.  I did that for about five years with my first guitar teacher Clint Stewart, who had a major influence on me.  He taught me a lot about guitar music theory, scales, improvisation, and provided a strong musical foundation for me.  After that, I studied music at Rollins College in Winter Park, Florida.  My guitar teacher in college was Bobby Koelble, an incredible and diverse guitarist who was also a member of the iconic metal band Death on the Symbolic album.  He helped me refine and develop my style and incorporate more jazz and diminished musical elements in my playing.

A: Yes, I can do both.  I mainly use tablature now, though, because it’s a lot faster for me to transcribe.

A: I don’t think I have a tone that is particularly “unique” per se, but there is a tone that I do strive for.  The tone that I have has more mids, a little less treble than mids, and very little bass.  I feel like it is a balanced blend of a thrash guitar type tone with a modern tone.  I don’t use a high amount of gain (it’s just a smidge higher than in the middle) but it’s still punchy and edgy.  I strive for bite and clarity.  I try to separate my frequencies from our other guitarist Dennis and from our bassist Justice.

A: The guitars I use in Auditory Armory are a 1991 Ibanez S540 with Fishman Fluence Modern pickups; an 8-string Agile Septor guitar with a Tosin Abasi DiMarzio Ionizer pickup in the bridge; a Solar Guitars S1.6PP with Duncan Solar pickups and an Evertune Bridge, and a Fender Stratocaster with Seymour Duncan Jeff Beck and Jazz humbucker pickups. 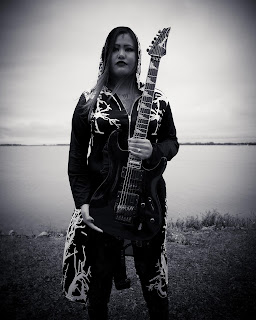 7.What about pickups? Passive or active ? Tell us about them.

A: When I have the option, Active.  Only my Ibanez with the Fishman Fluence pickups has the option to do both.

9.Do you have a pedal board? Tell us about that badboy.

A: I use the HeadRush FX pedalboard.  It has everything that I need in it – a tuner, looper, and a library of effects and EQ options that sound great and organic (not too digital).  All of my clean tones have an amount of Cathedral reverb and Shimmer effect.  I love airy, breathy, ambient clean tones.  I also use delay for my lead guitar parts.  The HeadRush pedal also provides me an efficient workspace where I can create custom setlists and rigs.  This is really helpful because I can assign all the rigs I use for each song and then if the order of our setlist changes for a gig, all I have to do is just move the song in the order that I want in the setlist.  Then, in a live situation, I simply press the ‘down’ button to toggle through each song that will pull up all the rigs you assigned to it.  So convenient.  When I sing and play guitar at the same time, I try to keep my “foot pedal dancing” to a minimum.

A: I’m not really a gear-head, and I have a lot of rig options at my disposal with using the HeadRush FX pedalboard.  I do really like what I’m working with now.

A: Guitarists who shred just to show that they can play fast but lack musicality.

A: While both are important to guitar, I do think guitarists tend to have this obsession on getting the right tone.  When it gets to an insane level of checking every single minute detail, your focus becomes on those particles instead of the song in general.  Then you get lost in all the minutiae and forget about the song as a whole.  I think that the average listener, though they might appreciate a certain tone, won’t notice all the minute details.   The songwriting and the melody usually is what captures them. 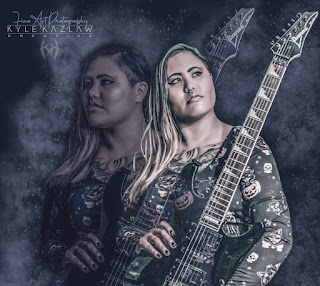 14.Who is the most overrated guitarist:

A: I think everyone has something to contribute as a guitarist.  But if I had to pick (I’m going to get so much shit for this) – Eric Clapton.

15.Who would you like a one hour private sit down lesson with, anyone dead or alive?

A:  I had a virtual guitar lesson with Kaki King one time.  It was very refreshing to learn a very unique playing technique that included so much percussion with guitar (she’s amazing).  But I’m not going to lie, I was so nervous that I even forgot how to tune my guitar right at the beginning of the lesson!  It was a little embarrassing.  I don’t think I do well with meeting my heroes – I’m much too shy and awkward to act like a normal person around someone I really admire.